Artistic analysis of my own existence, expressed in symbols, with sincerity and humor. Style: Abstract painting, contemporary art Technique: Oil ...

An abstract concept, which I prefer to caricature in a bidding character and also criticism of all the tastes and variants of the ideal wife. Style: ...

This is one of the most representative byzantine icons, depicting Archangels Mihail and Gavril - an icon painted in Byzantine style, with original ...

Stefania has been painting since the age of 13. She graduated from the National University of Art in Bucharest, focusing on Monumental Byzantine Art. Her work has been exhibited in England, France, Luxembourg, Austria, and Hungary.

In 2017, Stefania Nistoreanu became the first artist in Romania – and one of the very few in the world – to sell a painting using Bitcoin. An art collector based in Hong Kong bought Nistoreanu’s painting “Cryptsy” for 2 Bitcoin. The transaction was an international event in both the art world and the cryptocurrency market, and gained media coverage around the world.

Stefania resides in Oviedo, Spain, with her fiancé and their dog and cats. 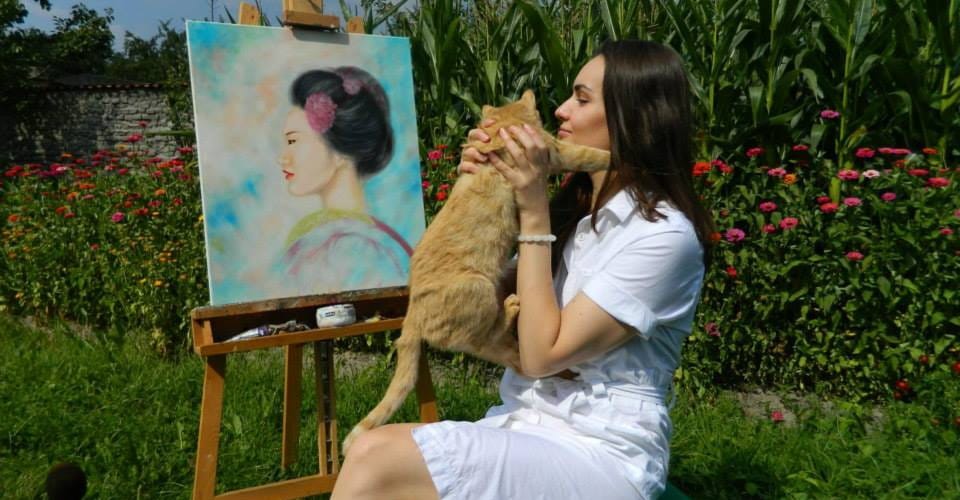 Keep your mind awake, your spirit clean, and your soul open. Have discipline, hold on to your purpose, use the power of your imagination, be ready for the truth. For what you believe in, fight with love and good will. Remember: every moment is perfect.

How does art blend with technology? While the planet was caught and surprised by the flow of Cryptocurrency currents - a vast domain, reduced most often only at Bitcoin - a plastic artist in Romania ...

Stefania Nistoreanu, the first Romanian artist to sell a painting in Bitcoin, appeared on May 9, 2018 in the South China Morning Post newspaper, both online and in print. “Many thanks to Hong Kong ...

The Artist of the Month, Unica Magazine

At 36, Stefania Nistoreanu is one of the most famous and appreciated young artists in Romania. Last year, the news that it was among the very few painters in the world who sold a painting in the ...
View ALL

Most paintings have been made over the past five years, a very prolific period for the artist.

"Exposing to France has been an older project and I am very glad that it's happening, especially in a city as elegant as Strasbourg. I bring with me works in which I have invested a lot of energy and who speak very well about human nature and its quests. I have tried to offer some answers and I am honored to share with new people who come from such a rich culture, "says Stefania.

The Salon d'Hiver Salon d'Hiver is organized by International Art Events - London and takes place between 6 and 9 December 2018. This year's edition, 48 artists from 14 countries will exhibit more 300 works of art.

Stefania Nistoreanu is one of the most well-known and appreciated young artists in Romania, and her works have been presented over time in numerous publications and national TV stations.

In 2017, she became the first artist in Romania and one of the few in the world to sell a painting in the Bitcoin virtual currency. The transaction was an international event both in the art world and on the crypto market and benefited from intense media coverage worldwide.

Stefania painted at age 13 and graduated from a highschool of arts and a university in the same field, specializing in the Byzantine Monumental Art. She has exhibited in several cities in the country, as well as in Luxembourg, England, Austria and Hungary.
The painter lives in Brasov.