Stefania Nistoreanu lives in Brasov, Romania. She is one of the most well-known and appreciated young artists in the country. Along the years, her works have been presented in prestigious publications and national television channels.

In 2017, she became the first artist in Romania, and one of the very few in the world, to sell a painting using Bitcoin. An art collector based in Hong Kong bought Nistoreanu’s painting “Cryptsy” for 2 Bitcoin. The transaction was an international event in both the art world and the cryptocurrency market, gaining extended media coverage all around the world.

Stefania has been painting since the age of 13. She studied at the National University of Art in Bucharest, specializing in Monumental Byzantine Art. Her works were exhibited in several cities in Romania, as well as in Luxembourg, Austria, England, Hungary and France. 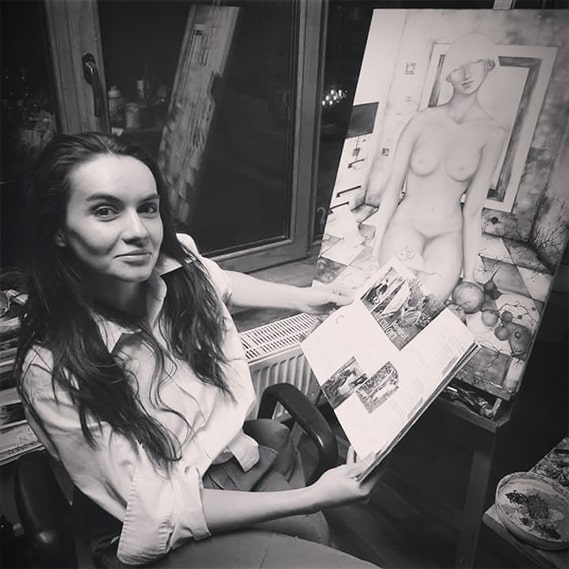 Keep your mind awake, a clean spirit and an open soul, give yourself time and be disciplined, do not forget your purpose and what are you supposed to do, use your power and imagination, be prepared for revelation, for truth. Do not compromise, fight with love and win with good will. Nothing's serious. Every moment is perfect.

The painter Stefania Nistoreanu exhibits at the Strasbourg Art Salon

The painter Stefania Nistoreanu first exhibited in France at the fourth edition of the Strasbourg Winter Art Salon. The event begins Tuesday, December 6, and takes place over four days. One year after her most recent international exhibition (London),Stefania has led to Strasbourg seven ...
Read more...

Stefania at the Parallax art and design fair in London

On October 21 and 22, 2017, Stefania attended the Parallax art and design fair, held in London twice a year.More than 200 artists - painters, sculptors, photographers and jewellery designers - from 40 countries were present at this fair where not less than 7,000 products were exhibited. The 20th Parallax Art Fair was ...
Read more...

Stefania Nistoreanu exhibits for the first time in Austria

The painter Stefania Nistoreanu, who has remarked in recent years in Romanian art through his unusual works, exhibits for the first time in Austria during an event that takes place today at the Openair Gallery near Vienna. Stefania is the only artist of Romanian origin invited to present her work at this exhibition, ...
Read more...
View ALL

During our lives, we, humans, tend to take everything too serious. We believe that we are extremely important and that we do important things. In ...

Prison has many forms – it’s the placation of your own ideas, an obsession, a lack of courage. No one is free, we are all prisoners of our own ...

Representation of a beautiful geisha – from the series “About Japan and Its Fascination”. Style: Figurative painting, portrait Technique: Oil painting on ...

A painting also called  Kyoku Tou (Far East), inspired by my last journey to Japan. It's a tribute to the great Hokusai, the painter that depicts the ...

Unhappiness, uncertainty, excess zeal, desire to be loved at all costs, compromise, fear of losing, doubling. Look at yourself from the outside, ...
View ALL
I have presented my art in all these beautiful cities around the world

How does art blend with technology? While the planet was caught and surprised by the flow of Cryptocurrency currents - a vast domain, reduced most often only at Bitcoin - a plastic artist in Romania ...

Stefania Nistoreanu, the first Romanian artist to sell a painting in Bitcoin, appeared on May 9, 2018 in the South China Morning Post newspaper, both online and in print. “Many thanks to Hong Kong ...

The Artist of the Month, in Unica magazine, February 2018

At 36, Stefania Nistoreanu is one of the most famous and appreciated young artists in Romania. Last year, the news that it was among the very few painters in the world who sold a painting in the ...
View ALL
2022 Stefania Nistoreanu Artist
DESIGNED BY: GRAPHWIRE